I think you're the fastest car on track right now.

Roger could hardly believe what he was seeing. For the first time in over a year, ProjectCRX was back on a racetrack. And it was fast.

It seemed like a miracle for Martin and Roger, who had brought the CRX back out to a frigid MoE HPDE day for its first test of the 2020 season. Our all-too-close encounter with the 350Z caused so much damage that the entire left front corner of the car had to be replaced. Between budget issues and quarantine restrictions, it took over 12 months to rebuild the car to a track-ready state. When it finally did make it back, it arrived on the back of a U-Haul rental trailer with three body panels still covered in shipping primer. If it completed one full 20-minute session without falling apart, we would have been happy.

Yet just 2 hours into the day, ProjectCRX driver Martin Szwarc found himself lapping our 109hp CRX so quickly that he was being regularly held up by 400hp sports cars. We didn't know whether to laugh or cry. For the first time in a long time, Team ProjectCRX was having a good day at the track.

Of course, this wasn't down to blind luck. The team knew this was going to be our only chance at a proper track test in 2020, so we did everything we could to prepare.

At the very top of the to-do list was to install a 4.7:1 Final Drive that we acquired from an ITA racer in the Midwest. This was our secret weapon. The gearing in a stock CRX Si gearbox is so long that it makes 5th gear virtually unusable at most tracks. The larger final drive gear would shorten the ratios and give us a much-needed boost in acceleration across all five forward gears. Martin towed the car to 4130 Fabrication, where the final drive would find a new home in the Honda L3 transmission case alongside a new MFactory helical LSD. 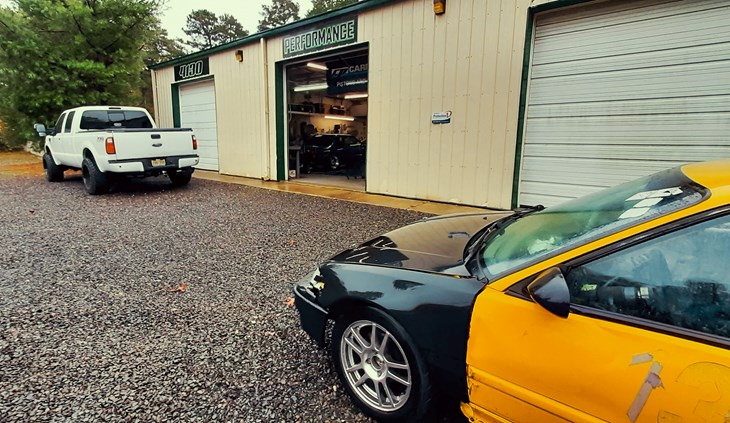 While we waited for the transmission experts to finish their work, Roger ordered a set of lightly used Hoosier A7 DOT R-Compound tires in 205/50R15. The A7s are Hoosier's softer DOT R-Compound slick and is designed to warm up quickly - Exactly what we needed on a 2000lb racecar in near-freezing temperatures. Because two out of four Kosei wheels had sustained serious damage in the crash, we mounted the Hoosiers on an old set of 15x7 Motegi Racing SP10s that we found in the back of Roger's garage.

The upgrades worked exactly as planned. Martin acclimated himself to the CRX with unnatural speed and started belting out fast laps. This sudden turn of speed came as a surprise to everyone, especially the other drivers in their group who found their mirrors filled with grey and yellow Honda through every corner.

No test would be complete without an issue or two. During one of the first sessions of the day, Martin survived a lurid spin through the Lightning circuit's fast and tricky downhill Turn 7. He returned to the pit lane for a quick visual inspection before going back on track, only for the CRX's D16A6 engine to shut itself off two corners later. NJMP's EV crew towed the stricken CRX back to the paddock so we could get a closer look.

What we had was a car that would shoot flames but refuse to start when the key was turned. The fuel pump turned on, the starter spun over, but nothing came from the exhaust other than the loud pops of a backfiring Honda. 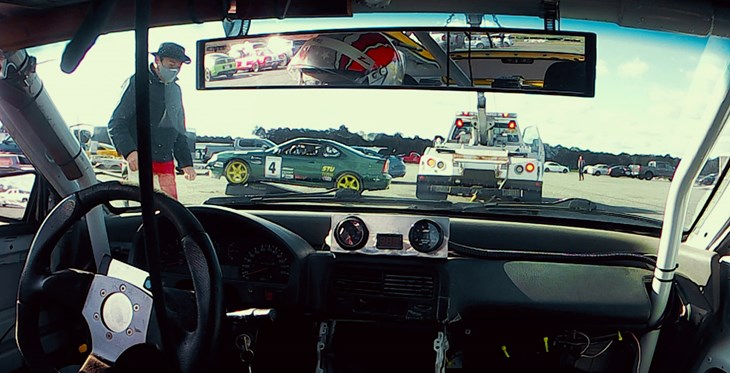 A frantic investigation revealed four fuel-soaked spark plugs. No spark. Pulling off the distributor cap revealed something else. No rotor.

The small screw holding the distributor rotor to the shaft had fallen out and seemingly vanished into thin air. We found the rotor clattering around in the cap, but the screw was nowhere to be found. Not wanting to have a loose screw flailing about in the sensitive electronics, we disassembled the distributor itself. But we found nothing. The screw was gone. 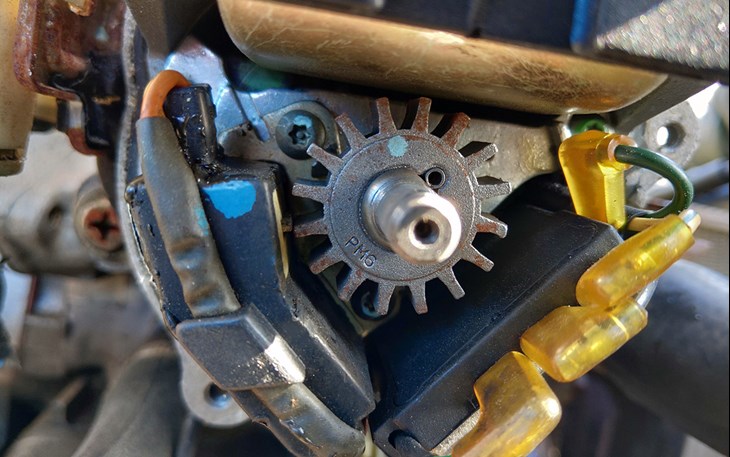 Fortunately, there was a bolt with the right size and pitch in the spares kit, and the friendly owner of a 944 lent us a hacksaw with which we could cut it to the right length. Problem solved.

15 minutes later, the distributor was back on the car, and Project CRX was ready to pound out lap after lap on the Lightning circuit:

The combination of a 4.7:1 final and limited slip turned our unassuming CRX endurance racer into a force to be reckoned with through the fast, twisty Lightning track. What the car lacked on the long straights, it made up for in unbelievable speed through the slow corners. Martin was easily the fastest car on track through the tight Turn 2-4 complex, while none of the street cars could keep up through the banked 180-degree Lightbulb. We couldn't believe how fast our little yellow Honda was lapping. In one of the early afternoon sessions, Martin clocked in a lap time of 1:19 - the fastest the car has ever run at Lightning by four full seconds.

By 4:30 PM, twilight descended to draw the curtain on our first successful test day in a very long time. The yellow Honda drove onto the trailer under its own power, and the two team members drove to a nearby Chili's to discuss winter upgrade plans over an order of "carnitas fajitas" that smelled suspiciously like chicken. 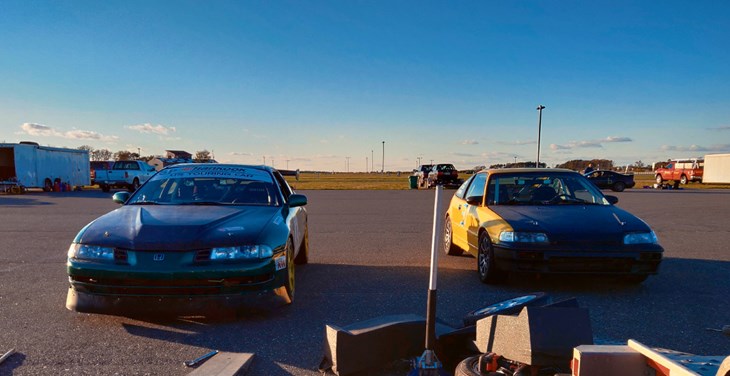 Not only did the CRX perform flawlessly, Martin proved to be surprisingly quick for someone who hadn't driven on track in a year.

It wasn't until a few days later that we found out how Martin had kept his skills so sharp: 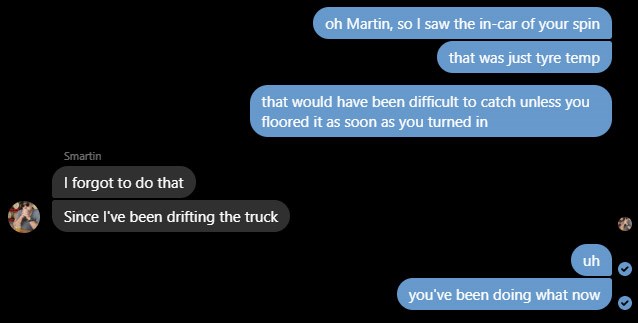 It turns out that Martin thought it would be sensible to practice car control in his 4200lb Chevrolet Silverado Full-Size pickup truck... and has spent the year commuting to work like Initial D's Takumi Fujiwara.

It seems there are a few things will never change.