If you're upset about the CRX, you should the see other car.

If there was one thing the team wanted from the 2019 SCCA Summer Thunder weekend, it was a triumphant return to wheel to wheel racing for Martin Szwarc.

For the past few years, ProjectCRX had taken up residence with the Szwarcs, spending much of this past winter and spring as a racy-looking piece of lawn decor. While it remains an attractive and interesting conversation piece, we all knew that it didn't belong there. After all, ProjectCRX is a racecar, not a show car. Fortunately, Martin's enthusiasm for wheel to wheel racing had not waned. All it took was a little encouragement, a weekend of wrenching, and some new belts before Martin and ProjectCRX were ready for their return to racing.

Saturday, August 10th, 2019, 6:30 AM - The team rolled into NJ Motorsports Park's Thunderbolt circuit for the first time in over a year. Though the flaking yellow paint on the CRX's exterior betrayed its age, it had lost little in performance or reliability. 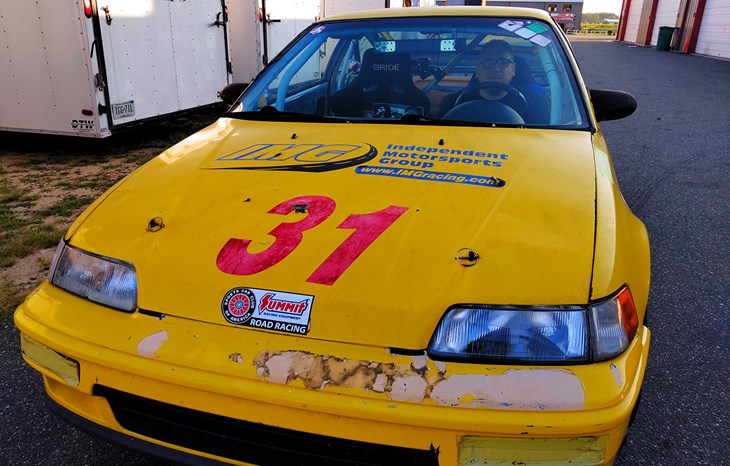 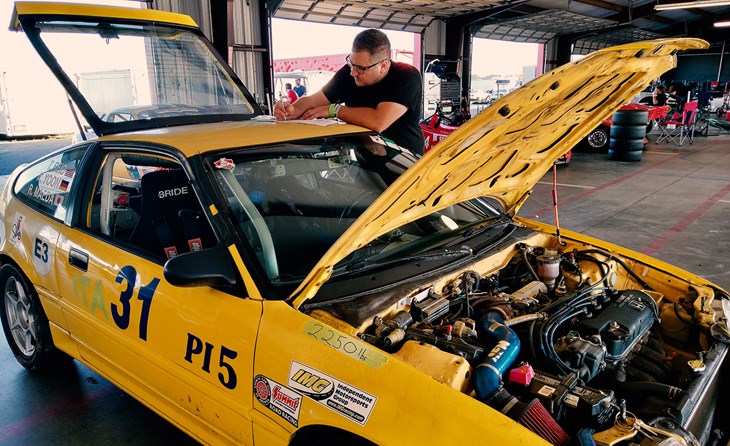 Martin rolled through technical inspection with surprisingly few issues. There was one small snag - The tech inspectors questioned why the car's brake lights still worked when the master kill switch was off. A few minutes of negotiation later, and the inspectors agreed to let us race this weekend if we fixed it before the next race.

It's fine. We'll just get Cessna to rewire it.

Within the hour, ProjectCRX would roll into pit lane for its first qualifying session in a long time.

Considering how long it had been since their last competitive outing, both car and driver performed admirably. Robert Oliver's hand-built Honda D16A6 awoke from its slumber with a sharp rasp before running like clockwork throughout the entire 15 minute quali session.

Its bulletproof reliability gave Martin the confidence he needs to unleash his special skill - Something we call "Athletic Intuition". You know that one friend who seems to be able to pick up any game or sport and be instantly good at it? Martin Szwarc is that one friend.

In five short laps, he had rediscovered the speed he developed years ago, beating his personal best at Thunderbolt by 2 tenths and posting a respectable 21st out of 29 cars. Not bad for a rusty driver and rusty car handicapped by used Hoosier SM7 takeoffs.

SCCA race weekends often include a Saturday afternoon Qualifying Race - A shorter no-points sprint race that determines your starting position for the Feature Race on Sunday. It might seem like a waste of time, but we're actually in favor of the format. It's a good way to get the drivers mentally prepared for the wheel to wheel battle to come. And we had just the guy to help us make the most of this opportunity. 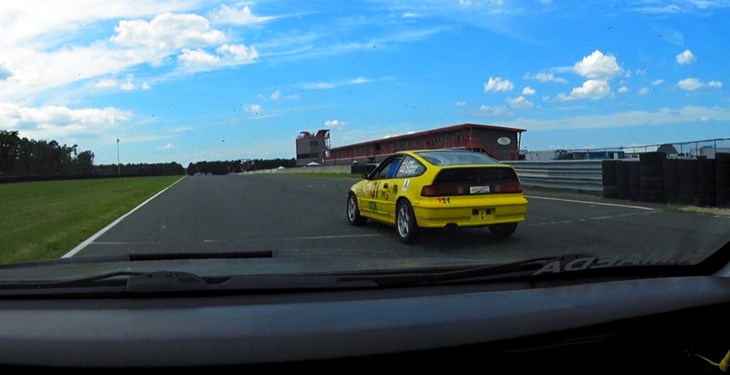 Team ProjectCRX's driver coach Todd Reid happened to be working on the Lightning circuit that day. When we told him that we were racing on Thunderbolt, he skipped his lunch break to trek over and help us get that extra bit of speed out of the car and driver.

Martin's strategy in the Qualifying Race would be to hang back and focus on getting in tune with the car rather than jump into CQB with his closest competitors. It was the right move. He managed to find an additional two seconds of lap time, putting ProjectCRX squarely in the midfield pack. Todd gave our driver a few pointers on traffic management and some words of encouragement before going back to his day job. It was a very encouraging Saturday.

I think you have a little more speed in you through the Octopus, but you're doing good.

Sunday, August 11th, 7:30 AM - By the time Martin and Roger returned to the paddock, ProjectCRX driver-mechanic Andy Yoon was already doing a once-over on the car. It was a reassuring sight. In addition to being one of our faster drivers, Andy is one of the most careful mechanics we know. If something on the car looked off, he would spot it. Andy came back with some questions on the brakes and underhood electrics, but nothing major. It was encouraging to say the least.

Morning warm-up came and went with little fanfare or incident. On to the Feature Race.

Starting 21st meant starting between a pack of Miatas and the H Production class cars. It also meant being unable to get a clear view of the start-finish tower. Just moments before the start, Joel Gambino in the blue RP Performance Miata decided to tap his brakes in preparation for turn 1. Martin saw the rear end of a Miata started coming towards him on the grid and backed off the throttle. As all of this was happening, the starter waved the green flag. Not a good start.

Fortuitously, HP racer Dave Yeager seized this opportunity and drove the Maximum Attack Honda Fit right down the middle of the field. Martin instinctively followed the copper Honda through the pack of Miatas, using the CRX's nimble handling to first make up lost ground and then gain three places through turns 2 and 3. We knew the long gearing of the OEM Honda CRX gearbox would hurt him through the twisty final sector, but that was ok - The race was long and ProjectCRX has the power and handling to stay in touch through the high-speed corners.

However, the competition had other plans. Dr. David Zatz had even more power on tap under the hood of his Ford ZX2. The good doctor saw an opening through turn 2 and the bright yellow Ford went streaming past, its twin cam Zetec motor screaming as it made a beeline for the horizon. That wasn't the problem though. While this was all happening, novice racer James Elder had caught up to the midfield pack in the #6 350Z. This could be trouble.

Roger had been watching the Z earlier this weekend, and noticed that its driver was clearly still getting to grips with his car and the track: Despite being prepared for the faster T3 class, James was running similar lap times to ProjectCRX. Hopefully he would have picked up enough speed over the weekend to pull away from the CRX before they could tangle.

Unfortunately, this wouldn't be the case. The group caught a silver Miata that had spun off and was trying to get back up to speed. While Dr. Zatz had no issues powering past, the red 350Z would back out of an overtaking attempt between turns 2 and 3. Being off-line in that short straight caused him to run wide and mount the kerbs through the high-speed turn 3. In the blink of an eye, the Nissan had dropped a wheel into the dirt and was careening back towards the track - right into the path of ProjectCRX.

An almighty thud resonated through the cabin of the CRX as it bumped fenders with the red Z. The resulting impact spun both cars around down the short back straight, resulting in ProjectCRX taking another hard hit from the right rear corner of the red Nissan. Martin quickly straightened the car and restarted the car, but he knew the damage was terminal. Project CRX's first feature race of 2019 was over in just under 9 minutes.

Needless to say, Martin was furious. When the race director asked him to draw a diagram of the incident, he filled the page with angry spirals to show how out of control the Z was when the two cars came together. None of us could blame him. Turn 3 at Thunderbolt is an extremely fast corner with moderately high g-loading. Attempting evasive action in a non-aero equipped car would probably have resulted in an even worse incident than what had happened. By the time the whole event started unfolding, there was nothing he could do.

As for the car, the damage was worse than it seemed at first. The first hit flattened the left front fender and the second tore the bumper cover off, wedging it underneath the car. A wheels-off inspection showed that the front left wheel was pushed rearwards against the chassis, bending the lower control arm and pushing the driveshaft right up against the subframe. 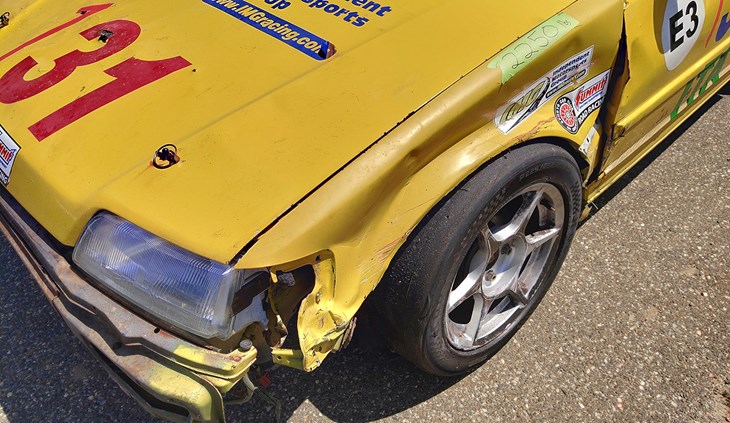 It was only when Martin went to repair the car later that we understood the full extent of the damage. The two hard hits had bent the front crossmember and pushed the entire corner back. The hit was hard enough to bend the driveshaft like a solid steel banana. This was well beyond what the team could fix in their garages. 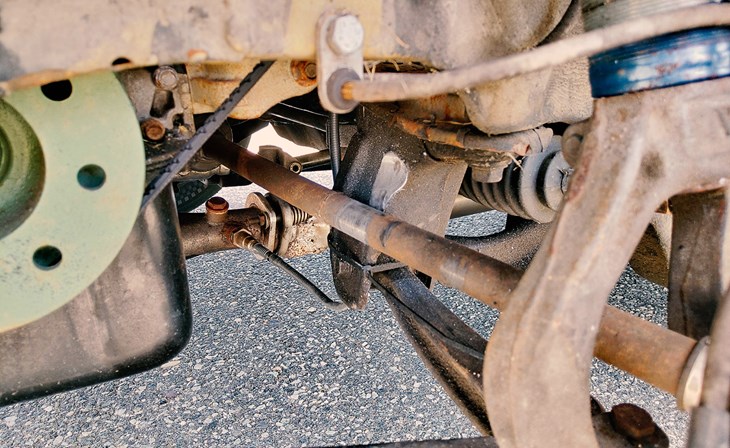 With that, the team packed up and headed for a quiet lunch at the Finish Line Pub. Our 2019 race season was over as quickly as it had begun. But as you'll soon find out, Team ProjectCRX is no stranger to adversity. We loaded up our broken car and headed home. The CRX would be back to fight another day. 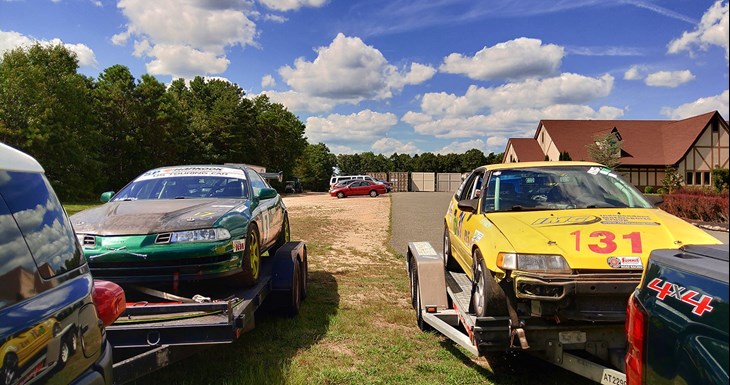