That is a good looking car.

The group of five friends returned to Entropy Racing and was immediately greeted to a wonderful surprise. Over the new year, Travis and Charlie had restored the CRX's faded, multi-colored exterior with a thick coat of John Deere Yellow. And the results were amazing.

As it turns out, John Deere Yellow tractor paint leaves a vivid, candy-like finish that rarely gets the appreciation it deserves. It's probably because most John Deere tractors are perpetually covered in mud. The rich yellow hue is as distinctive from 500 feet away as it is from 5 feet away. We always wondered why Charlie had his entire fleet of yellow Sports Racers painted in this color. That day, we found out why. 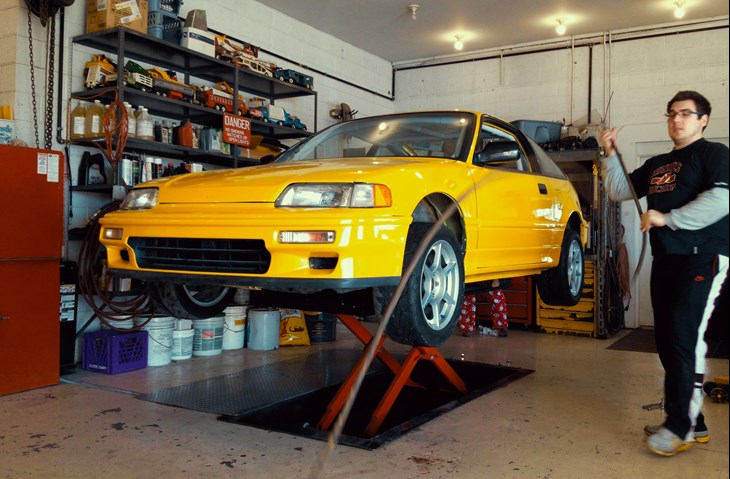 Unlike the rest of us, the eagle-eyed Sean wasn't enamored by the bright yellow finish. To prove his point, he highlighted some paint runs below the wing mirrors that betrayed a less than perfect technique. In retrospect, he was right. Thankfully, so was the price.

In a blatant demonstration of his sharp, sarcastic wit, Sean also made an obscure reference to the Honda Y49 curse. None of us knew what he was talking about until several years later. Not that any of us would have cared. There was only one thing on our minds - We need to finish this car.

The team dragged the giant pile of suspension parts from storage and immediately got to work. Out went the old Tokico Blue dampers, in went the Konis and Ground Controls that we salvaged from the blue CRX. The suspension control arms were systematically removed and briefly set ablaze so they could be refurbished brand new polyurethane bushings. Off came the rusty brake hardware, and on went new calipers, lines, rotors, and a set of Hawk racing pads which had been generously donated to the team by BestBrakes.com.

While Sean and Roger disassembled the brakes, Cessna repaired the mangled headlight wiring so we could install the stock USDM CRX headlights in place of the half-functioning HIDs that the car came with. Charlie and Dale stopped in to inspect everyone's work and offered a few words of advice on reassembling the car. The normally chatty team exchanged few words that afternoon, as the pleasant clacking of ratchets and the occasional silent nod took the place of conversation.

By Sunday morning, ProjectCRX was back on the ground. Charlie rolled out a set of 15" Kosei K1 Racing wheels from deep within his storage bins and mounted a set of used BFG summer tires that Sean had purchased from TireRack. All that was left was one hasty inspection, and the CRX drove out of the garage under its own power, debuting its new yellow livery to the world for the first time.

The team was ecstatic. Months of back-breaking work and thousands of hard-earned dollars had gone towards making this racecar project a reality. Roger and Andy took photos under a clear blue winter sky as Sean and Martin explored the car with the curiosity of a grade schooler breaking in a new jungle gym. 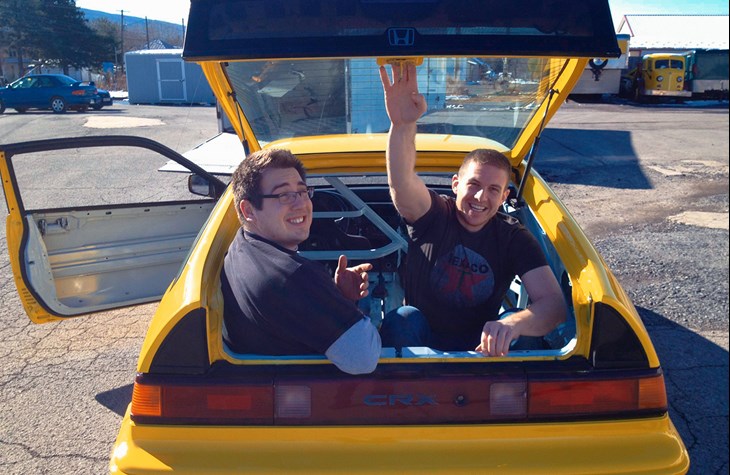 The productive silence that brought the car to completion was cheerfully broken with the sounds of laughter, hard-hitting high-fives, and excited conversation. There would be no more work that weekend. The team gathered in Charlie's living room and spent the rest of the afternoon excitedly discussing plans for the 2013 season. 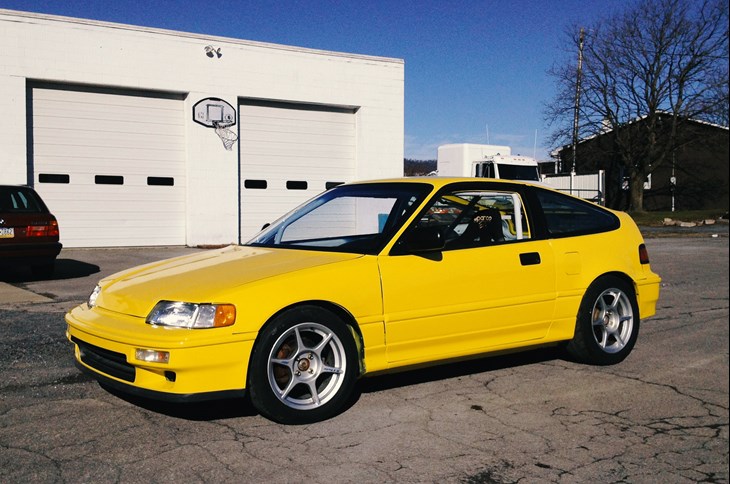 Entropy Racing's annual Winter Party was just around the corner, and Charlie wanted to feature it alongside his colorful collection of classic and modern vehicles. This would be the car's first public debut. After that would be our first shakedown at an early spring track day.

Then it was off to the races - literally.