Now that both cars made it to Entropy Racing HQ, it was time to start building. First order of business - strip everything of use from the blue CRX roller. 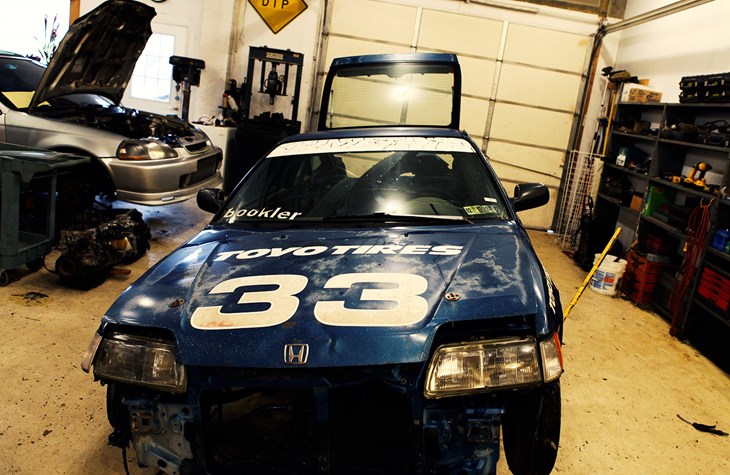 Since the cage was a bolt-in Autopower 6-point unit, removing it was a straightforward affair: Unbolt the feet and slice off the welded door bars with a Sawzall. While half the team carefully removed the 1.5" steel tubing from the chassis, the other half unbolted everything of value from the chassis. Out came the brake lines, control arms, Koni Yellow dampers, and even two(!) brake bias adjusters that were inexplicably mounted in line with the stock brake bias valve. 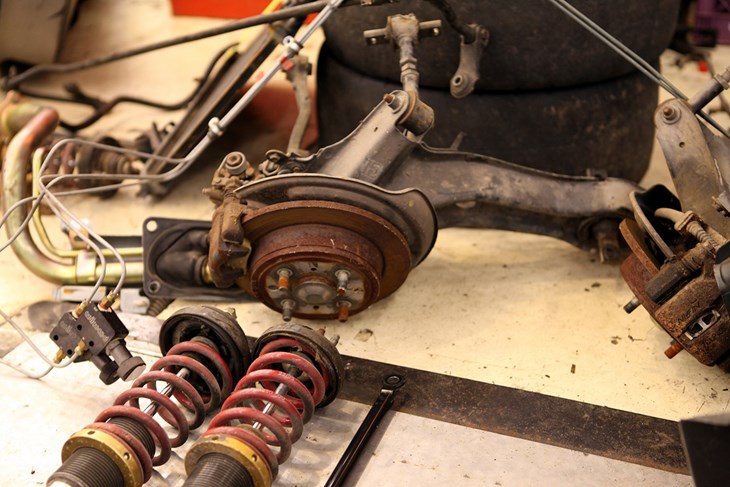 We also took any salvageable-looking body panels from the heavily battered car, which ended up amounting to one fender, one door, and a rear hatch. Charlie even sliced off the exhaust in case it could be used later. By Saturday afternoon, the team was forklifting the bare husk of the blue CRX onto a flatbed trailer for its final trip to the metal recycler. 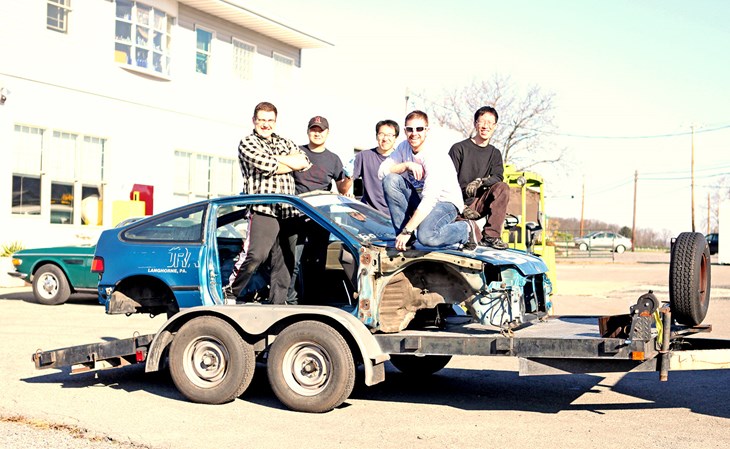 There would be no time to mourn the demise of the ex-Honda Challenge racecar: There was a lot of work to do before the yellow car could be raced.

The second order of business was to remove all of the interior pieces out of the yellow car. Out came the stock carpets, seats, interior trim, and sunroof mechanism. Anything salvageable would go up for sale to cover the costs of consumables and hardware that we were using. Both cars also came with a box of spares and odd aftermarket parts. Some of the parts, such as the Momo steering hub, would enter service in our new CRX racecar. Others, such as this knock-off Mugen shift knob, would be destined for eBay. 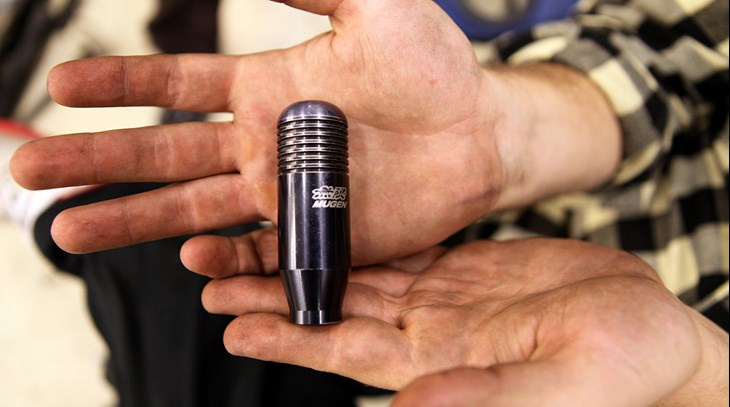 Sean, the fiery and fearless racer of the group, had little interest in cataloguing parts, however. He wanted to see the CRX run under its own power and was determined to make that happen. Entropy Racing Chief Mechanic Dale suggested that the no-start condition was some sort of electrical issue that was causing a fuel delivery issue. Without hesitation, Sean dove headfirst into the mass of hacked-up wiring under the dashboard in search of the root cause. 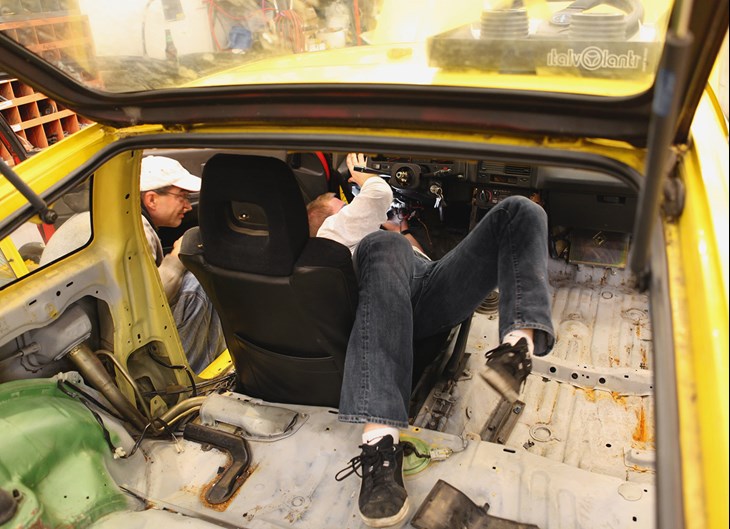 Like good teammates, we left Sean to it. Sean loved the company of friends, but we knew that he always did his best work when he was left alone. Sean had a tremendous eye for detail and a brilliant deductive mind that would put most scientists to shame. All he needed was a little time to focus, and he'd figure out what was wrong.

The strategy worked. Sort of. By the time Chris, Martin, and Roger had finished curating the pile of parts, Sean had replaced several bad wires, removed half a dozen vampire taps, and diagnosed a bad Main Relay. We swapped in the main relay from the spares pile and heard the yellow CRX sputter to life for the first time... only for it to die moments later. There was something else wrong. Charlie and Dale jumped in to help. But even the seasoned experts were having trouble pinpointing the cause. 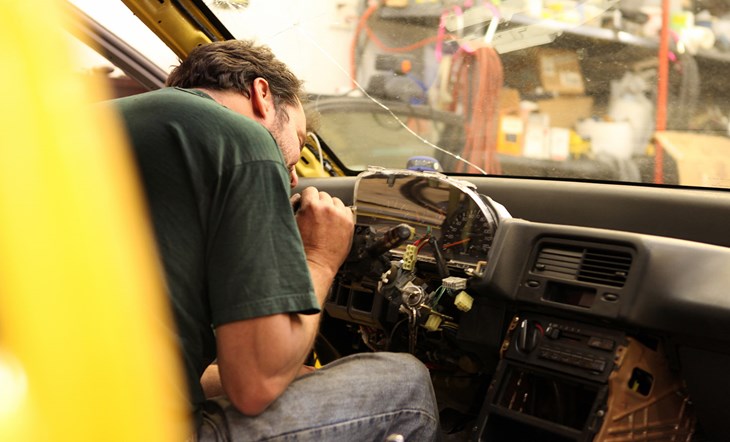 Unfortunately, we ran out of time before we could figure out what was wrong. It was getting late on Sunday and the team had day jobs to return to on Monday. Our troubleshooting session would have to wait until next time.

Two weeks later, the team returned to some unexpected good news: The yellow CRX was running. Dale's detective work had uncovered a huge pile of sediment at the bottom of the fuel tank. While we were away, Charlie and Dale had swapped the yellow CRX's gas tank and pump with the one removed from the blue car. Just like that, ProjectCRX was alive.

Time to transplant the cage. Charlie offered to convert the bolt-in Autopower to a proper weld-in cage if we ground the knubs left on the main hoop. Normally this would be Roger's job, but he was a bit squeamish after a recent grinding accident that took a chunk out of his right thumb. So Sean took over and spent the evening carefully grinding DOM steel tube from the Autopower's main hoop. 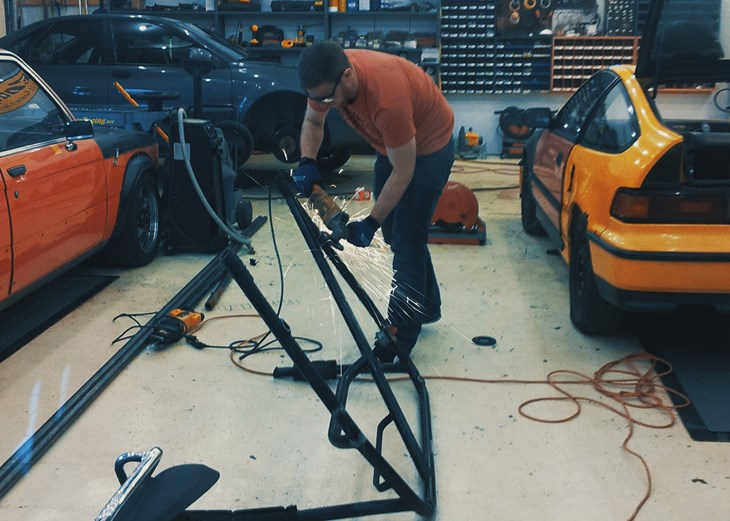 The whole process was dirty and dangerous. And it was worth it. Charlie took the freshly cleaned bars and immediately started building out the new cage. He pushed the Autopower main hoop right up against the roof and built boxes underneath the legs. He bent two new front legs from new tubing and replaced the driver's side door bars with a NASCAR-style cage to improve impact attenuation and it much easier to get in and out of the car. 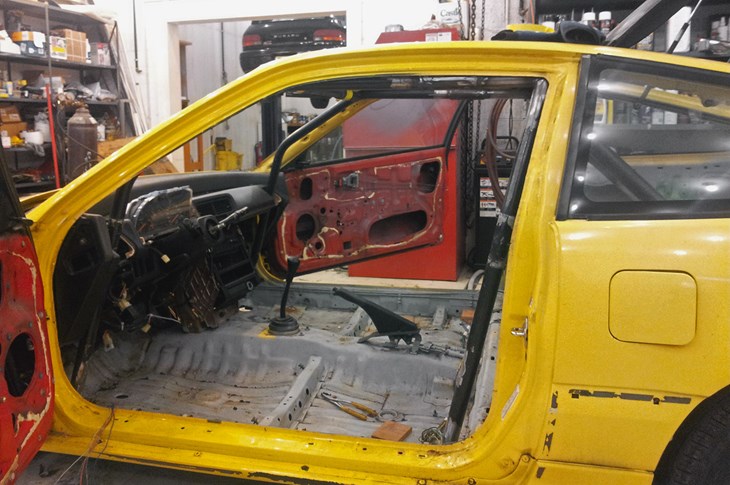 The result was a racecar that was roomy enough to fit and protect a driver of any size, from Chris' lithe 135 lb body to Martin's burly 200 lb frame. It was exactly what we wanted in a multi-driver endurance racing car. The team went off to the holiday break beaming with excitement. Our racecar was starting to look like an actual racecar.

While everyone else spent their holidays at home, Charlie commissioned local paint and bodywork specialist Travis Snyder to give the CRX a new coat of paint, starting with the interior. The results were astonishing. The few coats of light gray paint completely rejuvenated the interior of our 20-year-old Honda to the point where we didn't even recognize it. 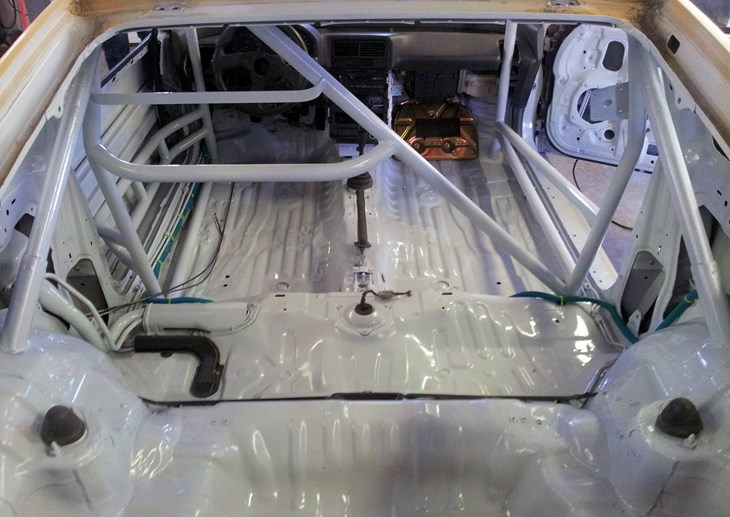 And the best was yet to come. The car was scheduled to go back into Travis' paint booth just a few days later to finish the exterior. The color of choice? John Deere Yellow, an unmistakably bright, tough paint that would highlight the "endurance" in Endurance Racer.