BANG. The sharp sound of metal hitting metal fills the cavernous cockpit of ProjectCRX. #1 driver Martin Szwarc had just executed a beautiful inside pass on Dan Freeman's Miata on the entry to Lightning's turn 2, but started moving back to the outside a moment too soon. The left rear corner of our CRX contacted the right front of Dan's black Mazda - not hard enough to push either car off-line but leaving a sizeable dent on Dan's front fender.

It had been a tough race for both drivers. A highly competitive field meant that both Martin and Dan would spend most of the Lightning Challenge weekend fighting over 4th and 5th place. Compounding the issue was the makeup of the race group. The Improved Touring A race class is typically grouped with the thundering V8s and high-powered turbo muscle of the Big Bore race group, and the racers usually vote to switch groups and join the Improved Touring S group, which runs at a more similar pace. However, the Improved Touring S group was running much later in the day compared to the Big Bore cars, and many of the racers wanted to go home early on Sunday. So our little 109hp CRX was stuck navigating the track while lumbering, ground shaking V8 muscle cars and prototypes roared around them.

Still, both pilot and machine were faring far better than they had earlier in the weekend. The conditions were tough, and the competition even tougher - more so than any of us had anticipated. 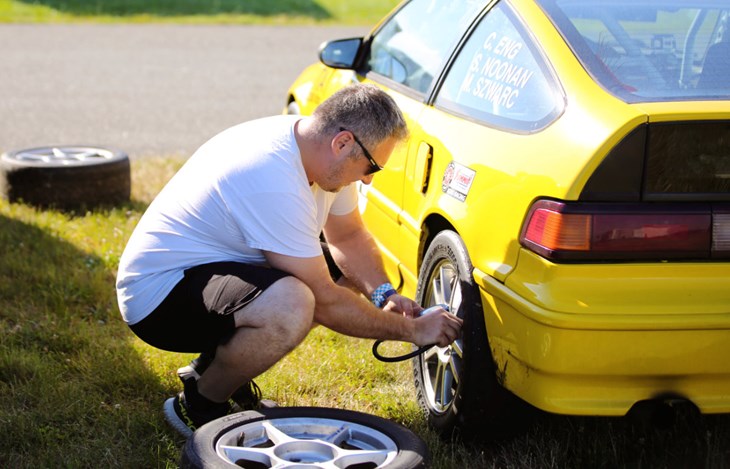 The weekend started quietly enough. Martin rolled into the paddock early with a car trailer borrowed from the ultimate gentleman racer, Dave Hofmann. Dave wasn't racing this weekend. The club needed workers to run the event, and Dave had opted to volunteer himself as a flagger so the race weekend could take place.

The team had entered the CRX in the Friday test day to gain some valuable lap time and gain intel on the competition - Only to find that Martin and Dan Freeman were the only two Improved Touring A racers participating in the test.

Though slightly disappointed that there weren't more cars to compare lap times with, Martin went about his test plan with surprising maturity. As planned, he shook off the cobwebs in the morning session before incrementally upping his pace, building back up to his usual competitive pace on a traffic-free track.

It helped to know that he could push a little harder that day. Martin had asked Northeast Tire's Robert "Smarty" Smart to bring an extra set of SM 7.5 takeoffs to swap on during the weekend. If he happened to lock up and flat spot one of his tyres, no big deal. All he had to do was the drive to the big tyre service trailer and get the spare set installed.

With that mental safety net in place, the CRX pilot decided to experiment with a warmup tactic that Roger had previously suggested: Push at 75% for the first half a lap, then immediately start driving at full race pace. This high-risk, high-reward process was passed down to him from local Spec Racer ace Charlie Turano, who frequently used this technique to get a jump on his competition.

Martin's natural athleticism helped him push past his fear of spinning to learn the technique in a few short laps. By the end of the day, Martin felt comfortable catching those early-session tail-out moments while quickly building heat in his tyres.

It was the best possible way to make use of the open track that day. And just as well - We would have no such luxury when the rest of the grid showed up tomorrow morning.

Qualifying day. Martin and Dan were no longer the only ones in the Lightning circuit's grassy paddock. The fastest and most competitive ITA racers in the region had arrived. 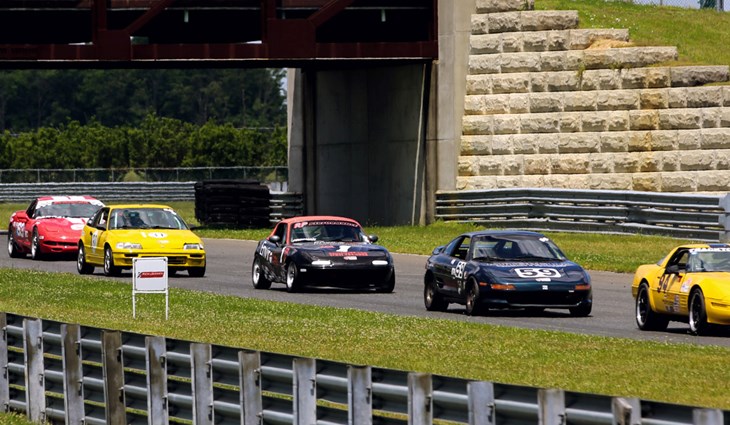 Among the competition were the classy, powerful 2nd gen Toyota MR2 of Peter Doane, the lightning fast Miata of Mid-Atlantic Road Race Series champion Joel Gambino, and the young Morgan Burkhard, who had moved up from karting into a fast yellow CRX like ours. The additional cars were a welcome addition for Martin, who now had a healthy field to race against. Unfortunately, the added competition came with an annoying side effect. Because Joel had reserved car number 31 before the start of the season, ProjectCRX would be forced to add the number 1 to the CRX's number board and run under #131.

On the upside, he wouldn't have to face this new competition alone. Roger Maeda had arrived with his US Touring Car Championship prepared Honda Prelude. Roger would spend most of his time focusing on his own races, but he had brought backup: He had convinced Andy Yoon to come out to take trackside action photos for the series. Both of them would be available to help between sessions. And there was even more backup this day. Martin had recruited South Jersey SCCA's Autocross Timing Tech Noah Pricskett for the weekend. There would be no shortage of hands if our CRX needed mechanical help.

The Improved Touring A class ran in Group 1, which meant that ProjectCRX would qualify in the first session of the day. It meant that the track would be cold and unforgiving. It also meant that Martin could put his test day experience to practice. 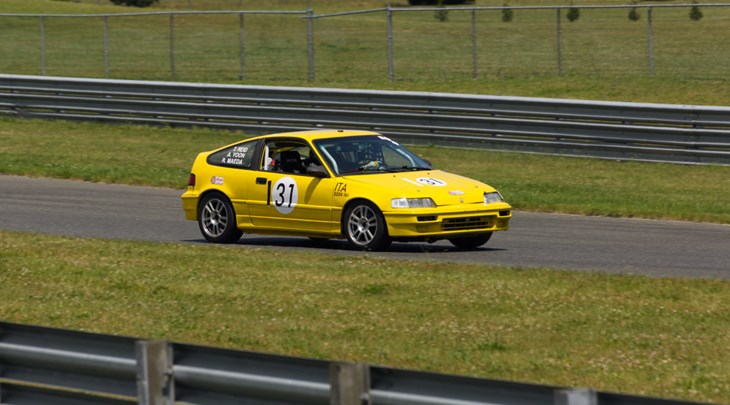 With an aggressive warm-up unseen in any of his previous races, Martin scrubbed the used Hoosier tyres up to temperature, found a clear section of track, and punched out a 1:20.598 on a track still damp with traces of morning dew. His fast lap put our CRX right in the middle of the ITA grid in 3rd place, ahead of Peter's MR2 and about 0.9 seconds behind Joel's Miata. Not a bad showing in a highly competitive field.

Unfortunately for the team, the afternoon Qualifying Race would prove to be a less spectacular showing. Despite starting strong, Martin quickly lost 3rd place when Peter Doane opened the taps on his Toyota's 5S-FE powerplant and motored past our yellow Honda early on. Dan Freeman's black Miata slipped past during an intense dogfight and managed to escape when a slow-moving big bore car baulked Martin mid-corner.

The painful reality was that our car lacked horsepower. While race leader Morgan Burkhard enjoyed an estimated 120hp to the front wheels of his CRX, our car had dynoed between 107hp and 109hp to the front wheels. A gap of 11hp might not sound like much, but that is a gap of about 10%. And a 10% difference in horsepower is huge in a race car.

The lack of motor-motivated grunt meant that Martin has to rely on his bravery under the brakes and cornering in order to stay ahead. Not an easy feat in a field where small-bore ITA cars were mixed in with slow-cornering big-bore V8s.

Although our Honda's reliability meant that the team had little to do mechanically, Martin still came away dejected and disappointed. He would wrap up Saturday with a lowly 5th place finish with little hope of improvement.

Later that afternoon, Martin cheered himself up by joining Andy in the outfield, taking a spare Canon DSLR camera to snap a few attractive action shots. However, the successful photo shoot didn't take away from the dread of facing the heat race tomorrow morning. 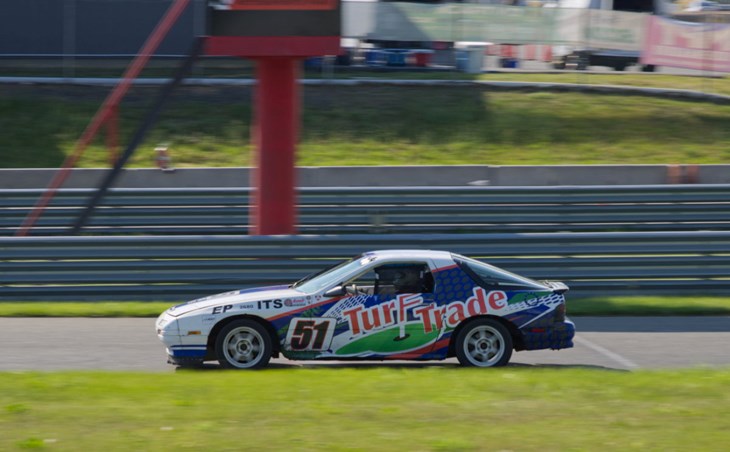 Thanks to his fastest lap during the qualifying session, Martin would line up 3rd on the grid for the Sunday morning Feature Race. His strategy was simple - Race hard and enjoy the ride.

This shift in mentality did wonders for Martin's driving. Within a few short laps, ProjectCRX was locked in a heated back and forth battle with Dan Freeman's black Mazda. The adrenaline-fueled bout of automotive fisticuffs was so enthralling that neither driver cared that they weren't fighting for a podium place. To them, it was them doing what they came to do - lock horns in the heat of a head-on battle, punishing each other's mistakes and grabbing every inch of road they could manage.

Have a look from our in-car cam. Don't mind the fact that our microphone broke:

Somewhere in the middle of the dogfight, Martin would move over and accidentally hit Dan's Miata on the entry to turn 2. A few laps later, he would make a mistake and drive off the track, giving Dan the chance to walk away with 4th place. At the end of 25 laps, our yellow CRX came home in 5th in class, albeit in a very different way from the day before.

At impound, Martin offered to pay for the dent in Dan's front fender. Dan graciously told Martin to "not worry about it". In the heat of their race-long dogfight, the pair had become fast friends. That alone was enough to temper the disappointment of finishing in a distant 5th place.

Before the team had even had a chance to unload the tow rig, the ProjectCRX team was back in their group chat, furiously working out how to get the car running at frontrunning pace. Martin suggested that a more experienced driver might be able to help him extract more speed from the nimble Honda. But after looking closely at the onboard footage, Roger came to the conclusion that the fastest driver of the group might only be able to find another few tenths - Nowhere near enough to challenge Morgan, who ran away with the race while turning consistent 1:18 lap times.

We all knew where we could get that much-needed horsepower. The Improved Touring rules allow for a 0.040" overbore and an increase in 0.5:1 compression over the stock block. Unfortunately, this means tearing down the entire engine and modifying the block. And Powertrain Wizard Robert Oliver was too busy renovating a house for a less-fortunate family member to rebuild our engine. At the time of writing, it has been nearly a month after this race and the team is still looking for alternative ways to squeeze more power out of their D16A6.

In the meantime, the team has taken to cleaning up and fixing small items on their to-do list. Loose trim panels and corner lights have been unbolted and glued back into place. The ill-fitting bumper and flappy gas cap are now secured in place with the same type of bumper tie-downs used by drift drivers and rally racers in the late 90's. 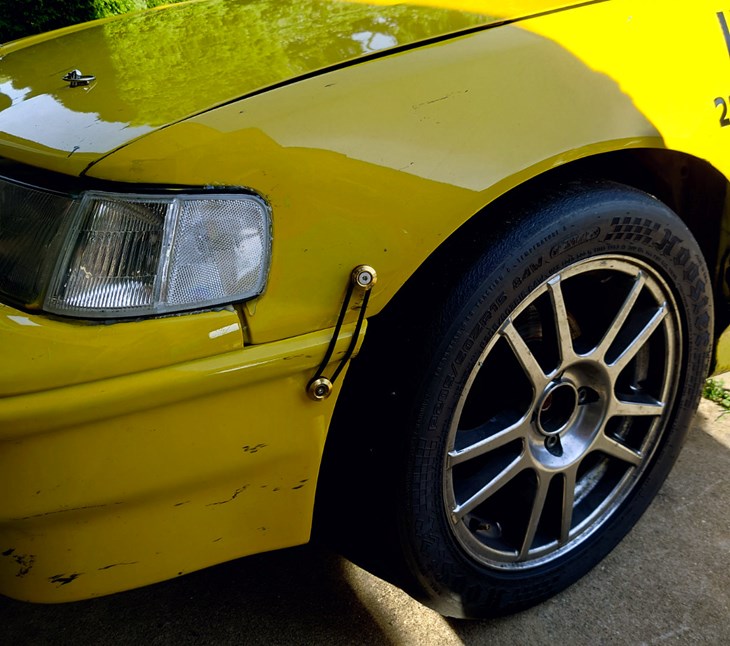 We still don't know how we are going to bring the fight to the front running pack. There is one thing we are sure of, however - ProjectCRX will be faster by the time it takes the green flag at its next race.