Alright. I'll tell Charlie that we want the CRX.

The autumn of 2012 brought a life-changing moment for the five car enthusiasts that started ProjectCRX. Sean Noonan, Chris "Cessna" Eng, and Roger Maeda had recently made the step up from Track Days and Time Trials to earn their race licenses. This in turn had Martin Szwarc and Andy Yoon contemplating their own foray into the world of wheel-to-wheel racing. There was just one problem - We had five drivers and only two cars that had the safety equipment necessary for racing.

Converting a road-legal street car into a racecar is an expensive and labor-intensive task. Gone are the days where you could build a racecar by slapping in a bolt-in roll cage, installing a 4-point racing harnesses, and bolting in a kiddie fire extinguisher from Home Depot. Preparing a car to the rules of a modern club racing class is an investment measured in thousands of dollars, and the extent of the modifications usually means the car won't be street-legal afterwards. As a result, the two of us who converted their street cars into racecars were basically broke. The three of us who didn't couldn't afford to be broke.

What if we bought a racecar together?

It all started with one innocent message between a handful of team members on Messenger. The idea was simple: Buy a used, race-prepared car that our three car-less drivers could share across the course of a season. Then at the end of the season, all five drivers could drive together in the biggest endurance race in the region, the SCCA's 12 Hour Devil in the Dark.

A quick search across local racing classifieds revealed that this was going to be more difficult than it seemed. By 2012, the economy had surged back from the great recession and non-essential toys were becoming expensive again. Even the cheapest used racecars sold for north of $7500. Even if the team split the cost five ways, it would still be too much for a group of 20-somethings with limited money management skills.

Ok, then what if we built the car ourselves?

On any other year, the group would have laughed the idea off as a quaint fantasy and gone back to discussing the latest Top Gear. But 2012 wasn't like any other year. This group of five had spent the summer working with Entropy Racing's Charlie Greenhaus to organize and run a series of high performance driving events under the IMG banner. During their last visit to Entropy Racing's Pennsylvanian HQ, Charlie mentioned that he was trying to sell a rolling chassis from an ex-Honda Challenge racecar. There was no engine or transmission, but finding a set wouldn't be a a problem: This rolling chassis was from 1991 Honda CRX Si, a still-popular car with affordable used parts and outstanding aftermarket support. The race-ready suspension, brakes, and safety equipment were all intact, including the all-important SCCA-legal roll cage. Best of all, Charlie was offering it to us for a very reasonable $300. 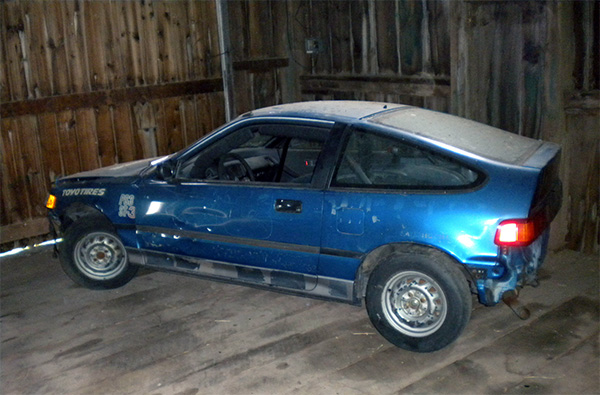 Fingers flew on keyboards as team members exchanged a flurry of messages and emails. Everyone liked the idea. We even liked the car. The Honda CRX was a sport compact icon when we got our drivers' licenses so it appealed to all of us. It made sense as a racecar too. Its light chassis weight would make it nimble enough to be exciting for the more experienced drivers, while its low power output would make it easy for those of us with less track experience to get up to speed.

Sean and Martin immediately started scouring classifieds for used engines and cheap go-fast parts. Andy found a service manual for the car and started figuring out what it would take to completely disassemble and reassemble the car. Cessna started thinking about all of the logistics and hidden costs around building a racecar ourselves. Roger picked apart the rulebooks of all of the local club racing organizations, trying to figure out how we could build the car so it would be legal to race in as many places as possible.

By the weekend, we had our plan: Find a donor CRX, transplant its powertrain into the roller chassis, and get it race-ready for the following season for under $2500. We would do the work ourselves, which meant spending almost every weekend of the off-season in a garage wrenching on a dirty and broken racecar. It sounded like a great idea.

The team made the decision to go for it. There was still a myriad of risks and a long list of logistical issues to sort out, but that could come later. First we needed to get that car.

Alright. I'll tell Charlie that we want the CRX.

And with those fateful few words, ProjectCRX was born. Over the course of the coming months, this group of five friends would take their first step into the world of racecar design and construction. Little did we know about the wild ride that would be waiting for us on the second step.