We have no idea. It spins without warning. On the straights even.

For those of you who are following ProjectCRX.Racing on Facebook, you'll know that our latest race weekend ended with a pair of strong finishes - a 3rd and a 4th - at the 2021 SCCA Lightning Challenge. And if it wasn't for a mishap with tire strategy on Sunday, that may have been an even been a win.

But the Project CRX story hasn't always been about strong fights at the front. Eight short years ago, our classic Honda was powered by nightmares as much as it did was by dreams. To give you an idea of what it was like, here's the story of the CRX's first ever on-track shakedown, at Virginia International Raceway.

Sean and Martin were already waiting in VIR's spacious paddock when the team rolled in on the Entropy Racing Freightliner big rig. Charlie had purchased the truck to transport his fleet of Renault-powered Entropy Sports Racers to IMG events during the season. But today there were only two cars in the big rig's stacker trailer - A trio of yellow sports racers as well as the freshly repainted ProjectCRX racecar. 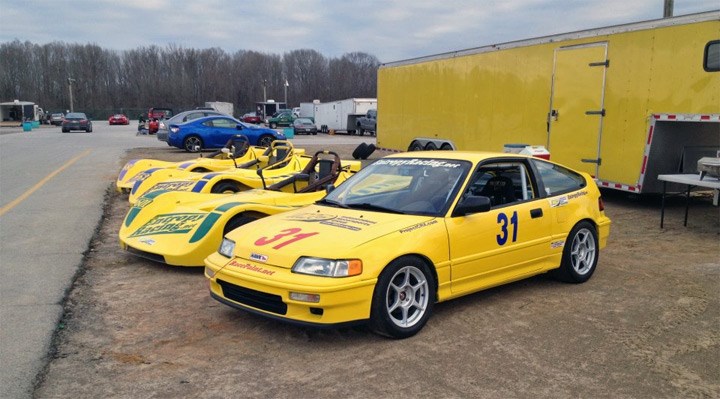 There were a few bumps on the road to the track, but most of the team made it. Charlie was already scheduled to test three of his Sports Racers at a Chin Motorsports track day at VIR and offered to add the CRX on its first ever shakedown. He even offered to include the entry fee as part of a package deal to the team. This was a great deal, so the team members pooled their funds and paid to go, only to get an email from the event organizers that the entry fee hadn't been paid.

When a request to pay the fee at the track was met with an angry (and borderline inappropriately worded) response from Chin's registrar, Roger ended up making a last-minute credit card payment to cover the entry fee. Then the fast-moving world of securities trading took an unexpected turn, which meant he had to tend to his day job instead of driving down with the team.

Thankfully, the rest of the team was free, and they had all made it. And the car was there safely too. Entropy Racing chief mechanic Dale had gone over the car and double checked our work on the car and local race alignment specialist Tim Stehr had put a safe, conservative alignment on the car. Aside from that, it was just as we had left it during its debut at the Winter Party.

Chris "Cessna" Eng claimed an early victory in the heated rock-paper-scissors competition to see who would christen our new racecar with its track debut. We were all happy with the result. Chris was the most conservative and cautious driver on the team, so it would be unlikely that he would suffer a major incident in the first session. Just in case, Entropy Racing's experienced race and test driver Charles Turano would ride in the passenger seat as insurance.

The team knew to keep their expectations in check. After all, this was a shakedown. We knew things wouldn't be perfect. But when our CRX returned on lap 3 with a rhythmic thumping emanating from under the body, we all knew something was wrong.

I uh... flat spotted all four tires on the second lap.

It turned out that Cessna had locked up all four wheels braking into Turn 1. The resulting flat spots caused so much vibration that the car was undriveable. Cessna tended to be a safe pair of hands, so none of us expected him to make that kind of mistake. But maybe he misjudged the grip of the Nitto NT01s in the frigid near-freezing temperatures.

Sean and Chris went to change to the spare set of tires, only to find that Entropy's trackside toolkit didn't have a floor jack that could lift the CRX. The SCCA Enterprises-built sports racers used jacks that looked more like formula car jacks than a standard hydraulic jack, and Charlie hadn't thought to bring one from the shop. Moreover, since the Sports Racers used US Standard Sized hardware, he was missing a few critical metric sockets that would fit the CRX.

Fortunately, Sean's brand-new Subaru BRZ came with a set of metric tools and the factory scissor jack in the trunk. He rolled out the tools without missing a beat, and the team got to the arduous task of changing the wheels with an emergency toolkit. 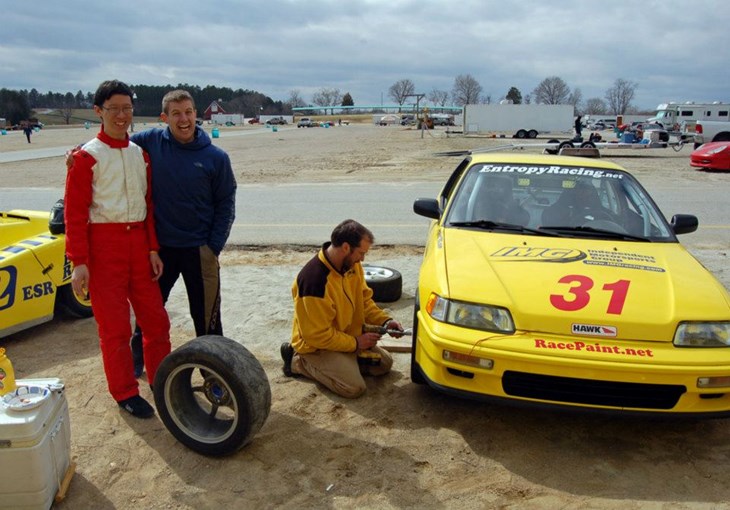 Cessna's smoky first-lap exit had shaken his confidence in the car's behaivor, so Sean volunteered to drive the CRX in the second session. Sean was the most aggressive racer of the team, and as he proved over a season of racing Charlie's Entropy Sports Racers, wouldn't be phased by a bit of car trouble.

But even the fiery hard charger found our CRX to be a handful. He too brought the car back after its third lap. Apparently, the rear end of the car had kicked out unexpectedly at Turn 14 and sent him flying off the road. Something was fundamentally wrong with the CRX's suspension system.

Andy, Sean, and Chris tore into the car with their limited tools, trying to find a loose ball joint or wheel bearing - anything that would explain the wayward handling of the CRX. With no answers in sight, Andy took the car out in the next session and ran the entire 20-minute session at a snail's pace to help diagnose the problem. While he did manage to avoid spinning, the car took him on several trips off the track surface, resulting in a patronizing talk-down from pit lane workers who thought we were just overdriving the car. 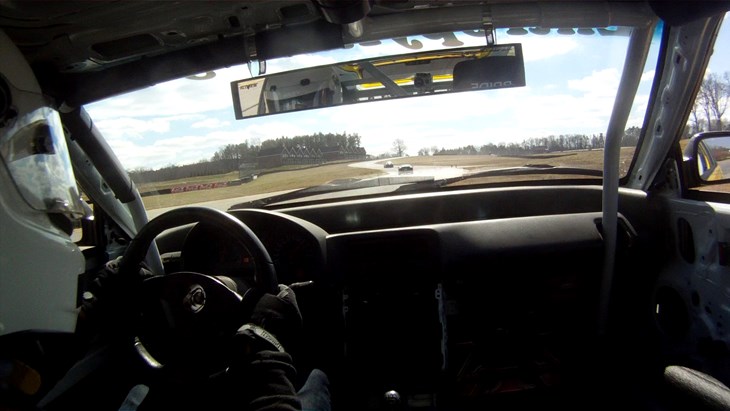 The most mechanically sensitive driver on the team suspected unexpected alignment changes to be the root cause and called Roger to get his input. Through his SEC-compliant wiretapped desk phone, Roger guessed that the rear toe link adjusters weren't fully torqued down. The toe links are the mechanism for adjusting rear toe in the 2nd generation CRX and are buried deep under the chassis of the car. Maybe one of them had come loose on the tow down to VIR?

Unfortunately, this guess was a bit wide of the mark. Sean took the car back on track in the next session to find that there was no improvement. The team was more confused than the internal auditors who had to listen to Roger's call and figure out what company this mystery ticker symbol "CRX" belonged to.

Thoroughly confounded and quickly running out of ideas, the team decided to roll the car slowly in the paddock and observe it for any issues. It was sports racer ace Charles Turano that finally found the problem. Our CRX's left front wheel was moving forward and back as Andy drove it around the paddock.

It turned out that the problem was in the front end of the car, not the rear. Specifically, the fasteners holding the radius rods, the forward-facing extensions on the front control arms, were completely loose. This allowed the camber, caster, and toe in the front end to shift uncontrollably, resulting in the bucking bronco in the car. The team quickly tightened the car using a spare wrench from Sean's car to finally put paid to the CRX's terrifyingly wayward handling.

The test event was much calmer after that. Charlie didn't have any trackside alignment tools in his toolbox, so we had no idea what the alignment was on our Honda. But it was stable enough that Sean, Andy, Cessna, and Martin were able to do a few slow but productive sessions in the car and get used to how the car behaved at speed. The car was driveable but slow. Chin Track Days' usual high-end Porsche-driving clientele passed our little Honda like it was standing still.

As a consolation for the troubled weekend, Charlie offered the team members the opportunity to ride in his spare sports racer. This was the highlight of Martin's weekend, as the handling capabilities of the light and nimble prototype thoroughly scared him through VIR's fast flowing corners. 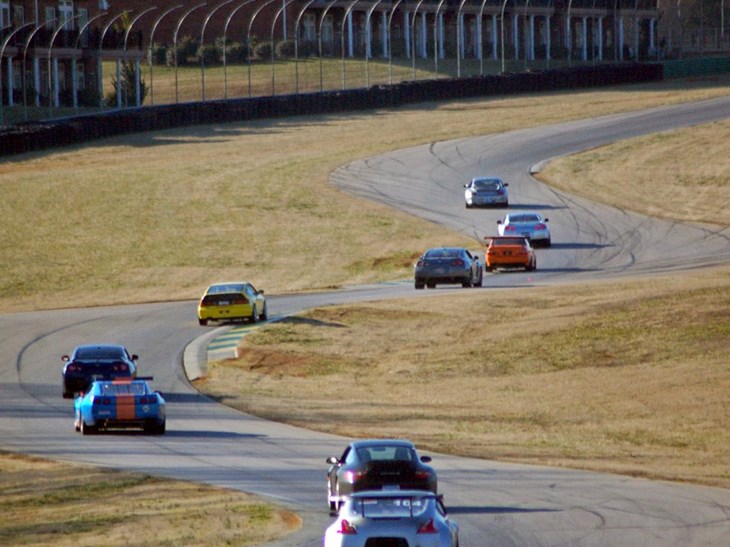 The team also had a chance to experience Sean's much-anticipated BRZ with some slow laps around the paddock. In the process, Andy inadvertently discovered that you don't need a key to drive the early model year BRZs, as he drove off and did a long lap around the paddock while the fob was still in Sean's pocket. This discovery led to uproarious laughter which brought some much-needed cheer to an otherwise difficult test.

So Andy just drove off in my car. And I still have the key.

Still, it was a tough weekend for the team and few of us left happy. Sean was particularly upset by Entropy Racing's lack of preparedness and inability to properly support the car, even after he paid for it out of his own pocket. Roger was annoyed by the entry fee blunder, but was even more upset about the Chin registrar's unaccommodating and unprofessional emails. Charlie later offered to make good on the entry fees, but Roger was so incensed by the event organizers that he declined the offer.

Later that week, Sean would suggest that we move ProjectCRX out of Entropy Racing and that we run the campaign on our own. At the time, Roger and Andy opposed the decision, citing our combined lack of experience and tow vehicles.

With this inauspicious start, the team returned to Entropy HQ to prepare the car for its racing debut - An early April Summit Point race with IMG.